The Dutch Painter Vincent Van Gogh (1853-1890) was the founder of the Impressionist Movement. He used colors unusually for his time. Art lovers and scholars tell you that if you know more about the use of colors in Vincent van Gogh’s artwork, you get a glimpse of his mental world.

Van Gogh didn’t use the real natural colors of his objects but used colors that could affect the viewers’ emotions when looking at the depicted objects. He also applied the paint onto the canvas in unique ways. In this article, we’ll look at Van Gogh’s views about color, what colors he used, and how he applied them in his paintings.

Van Gogh’s adventurous use of color

The brilliant Vincent Van Gogh artwork, where he experimented adventurously with color, changed the visual art scene dramatically. Van Gogh deliberately used colors to capture mood and emotion. However, realistically, color is not used in Van Gogh’s drawings and paintings.

As you learn about the paintings of Van Gogh, you discover that his technique of applying colors to the canvas was also unheard of. Van Gogh’s artworks were painted rapidly, and he used the paint straight from the tube in thick, graphic brush strokes. It is said that in his last 70 days, he averaged one painting a day.

At the beginning of his art career, he usually used dark colors such as olive green, raw sienna (a yellowish-brown color), and raw umber (a dark brown color). Then later, he added bright colors such as yellow, orange-red, blue, and green.

Sometimes, he used complementary colors to brighten and create contrast in his famous Van Gogh drawings. However, he used one color other times, as in his “Sunflowers,” which he painted in 1888. In “Sunflowers,” he limited his palette to yellowish colors. 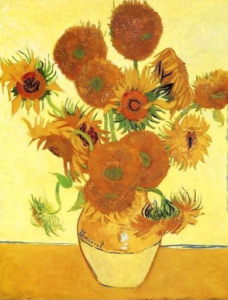 Interestingly, a popular theory behind Van Gogh’s color choices shifts to the lighter, yellowish colors is that he might have suffered from xanthopsia, or “yellow vision.” It is a color vision deficiency with a predominance of yellow in vision.

Van Gogh and the color theory

Although Vincent van Gogh’s artworks were initially painted with dark colors like most other Dutch painters of the time, he was always curious about colors and read many books on color theory. He was fascinated with complementary colors and discovered that yellow and purple, blue and orange, and red and green intensified each other.

After he had moved to Paris, he experimented a lot with colors, and over time, light colors replaced the dark colors in his paintings. An example of his use of complementary colors can be found in his “Self-portrait” (1889). His hair, beard, and mustache are orange, while the color of his clothes is the complementary color blue.

Vincent van Gogh also symbolically used color. He stated that yellow is a wonderful color – it stands for the sun. Therefore he used yellow in his famous painting “Sunflowers” and painted the flowers with almost no shadows or complementary colors. The yellow emphasizes the effect of the sun and conveys a message of life, energy, happiness and hope.

But when Van Gogh was in a “dark mood” and depressed, he used dark colors. In his painting “Shoes,” he used many brown and khaki colors. Brown is the color of earth and wood and symbolizes virtue. With the brown shoes, Van Gogh wanted to show the viewer the shoe owner’s hard life and humility. In the painting “The Night Café,” Van Gogh depicted horrible human emotions using red and its complementary color, green.

Vincent van Gogh was influenced by prints from Japan and used the Japanese custom of painting dark outlines around objects. He then filled the outlines with areas of thick color.  Apart from his preference for yellow, blue is another color that Vincent Van Gogh used predominantly in many of his paintings. He used different shades of blue and always complimented them with contrasting colors. The effect is that the blue stands out. Van Gogh associated blue with stability and depth, and it has a calming effect on your mind. 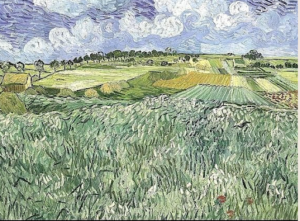 For interesting sake, let’s look at more detail regarding some of the most important colors used by Van Gogh.

Because of his unique way of color-use, images of Van Gogh paintings are complicated to create and duplicate the exact colors used by Van Gogh. But through the artwork of Vincent Van Gogh, you can learn a lot about his philosophies and his mental state by looking for the symbolism in his way of using color. This is because Vincent van Gogh’s images and colors almost always have a symbolic value.